When enlarging screen images, for example using screen magnifier utilities such as KDE’s KMag, the antialiasing used for rendering text becomes very visible (see left image). To limit the effect, simple pixel replication is not suited, but a different scaling algorithm needs to be used. The simplest of those algorithms is the bilinear filtering method, which is quite fast, but has the disadvantage of blurring the result.

More advanced methods, such as the Mitchell filter, obtain better results, but are slower to compute and introduce new kinds of artifacts, called ringing. For more information about the kind of artifacts linear scaling methods introduce, please refer to this interpolation introduction. 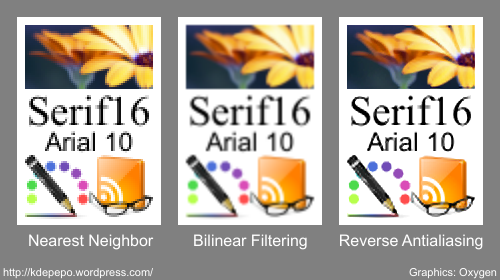 Several methods for non-linear image scaling were proposed, some of them especially fast, some of them optimized for pixel art, others using several megabytes of trained neuronal networks etc. There is always a trade off you have to make between the image quality, and the speed you get.

While the source code for the neuronal network-based scaler is available (as well as the trained data), it was out of scope for a simple screen magnifier, such as KMag. The algorithm should be fast (maybe the speed of a bicubic scaler), and work without additional data, so that it can be used for KMag.

Again, I was not satisfied with the methods that were previously freely available, so I developed my own version of a scaling algorithm. This time it is optimized for scaling antialiased text or rasterized vector graphics, because it effectively reverses the antialiasing process. The quality is certainly not perfect, especially when faced with thin diagonal lines, but I consider it good and fast enough to be useful in KMag. It should also be quite useful as a resolution doubler for high-resolution (“Retina”) displays, and GPU implementations should be simple.

On the right image, you can see my result, using some text and some graphics from the Oxygen team (unscaled image here). To get an impression how it looks as a screen magnifier, here is a screenshot of a Dolphin window (made by Peter Penz), and its resolution doubled version.

A description of the algorithm will follow later. Just be a bit patient, I am still learning TeX 🙂